As part of our commitment to preserving the art, culture and history of our heritage, we carry out multiple restoration and conservation projects in collaboration with different organisations. These include:

Ceclavín, Cáceres. Through its Spanish foundation, Iberdrola has finished the restoration process of the San Antonio de Pauda’s altarpiece in the municipality of Celavín, to preserve and enhance Extremadura’s cultural heritage.

The project, which required an investment of 44,700 euros, belongs to one of the main areas of activity of Fundación Iberdrola España: cultural development and preservation of the historical and artistic heritage.

The event was attended by the mayor of Ceclavín, Inmaculada Lucas, the diocesan administrator and vicar general of the Coria-Cáceres’ diocese, Diego Zambrando, and the president of Fundación Iberdrola España, Fernando García Sánchez.

The restoration works have comprised the treatment of the images of the Holy Trinity, St. John the Baptist, and the Virgin of the Remedies. There were several problems with the altarpiece, all of them mainly caused by the passage of time and the lack of maintenance of the properties they are kept in, where humidity and sudden oscillations of temperature contributed to its deterioration.

Among other acts, the restoration team has executed a mechanical cleaning of the accumulated organic remains, set the pictorial stratum, applied treatment against xylophagous insects, structural carpentry, and the restoration of the altarpiece.

The restoration of the San Antonio de Padua’s altarpiece is another example of Iberdrola’s commitment to Extremadura and its permanent purpose of promoting culture’s social value and the preservation of the region’s historical and cultural heritage.

Nuestra Señora del Olmo church, declared of cultural interest in 1982, is a stone building with a nave covered with starry vaults, a sturdy terraced tower next to the Presbytery, and a choir at the end. It is a Gothic-style building with hints of Renaissance and Baroque elements.

Fundación Iberdrola performs interventions in artistic monuments and unique buildings to install or improve the inside and-or outside lighting to contribute to the reevaluation of the historical and artistic heritage and improve energy efficiency on those systems.

This project aligns itself with the previous work that the foundation has performed in Extremadura over the last years, among which stands out the ornamental lighting of the Alcántara bridge and the Guadalupe monastery and the renovation of the Teatro del Conventual of San Benito de Alcántara lighting.

Higher School of Conservation and Restoration of Cultural Property (ESCRBC) is a centre of higher education dependent upon the Council for Education and Research of the Community of Madrid, whose primary purpose is to train higher education students to preserve and restore cultural assets. One important facet of this training is tutelage of students at the centre in real conservation and restoration projects.

On 16 August 2019, Fundación Iberdrola España signed an agreement with the Higher School of Conservation and Restoration of Cultural Property (ESCRBC) to collaborate in the training of students at the school during the 2019-2020 and 2020-2021 academic year by providing practical teaching in conservation and experiences with an asset of historical-artistic values to enhance their knowledge and expertise, bringing more personalised and comprehensive value to their training.

This is being achieved with the invaluable assistance of Cuenca Cathedral, which has provided the Higher School of Conservation and Restoration of Cultural Property (ESCRBC) with the altarpiece of St Fabian and St Sebastian, a work by Diego Tiedra dating to the 16th century – owned by the Cathedral – for restoration by final-year students under the supervision and tutorage of their teacher Mr Luis Priego. 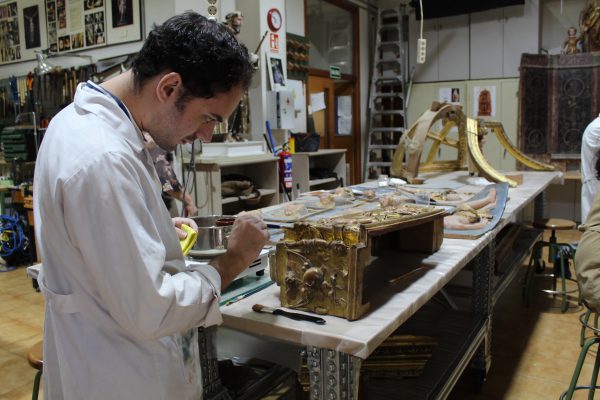 Restoration of the document collections at the Yuso Monastery Library - 2018

Fundación Iberdrola España and the Fundación San Millán de la Cogolla are working to restore codices from the 15th, 16th and 17th centuries.

In 2018, we renewed our collaboration with the Fundación San Millán to continue working to restore the collection belonging to the Yuso Monastery Library.

Nearly 400 volumes have now been restored since the Fundación San Millán de la Cogolla began the enormous task of restoring the Library in 2003. After receiving the consent of the Augustinian Friars, who own the Library, and the La Rioja Historical-Artistic Heritage Commission, this new agreement provides for the restoration of seven codices from the 15th, 16th and 17th centuries that require urgent attention due to their value and delicate state of conservation.

The codices were chosen by Father Pedro Merino and Ana Jessen, in whose workshop the restoration will take place. The state of conservation is very varied:

We have collaborated with the Fundación San Millán de la Cogolla for several years, during which time we have also participated in the restoration of the latticework around the high altar at Yuso Monastery and in refurbishing the Exhibition Hall. We also entered into another collaboration agreement for the interior and exterior lighting at the Monastery.

To restore the codices, their condition is carefully analysed and individual treatments are established.

Restoration of the altarpiece in Santa María Cathedral in Cuenca - 2018 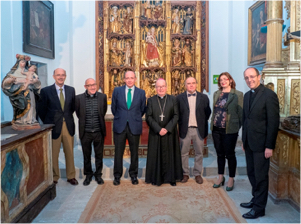 Fundación Iberdrola España and the Madrid School of Conservation and Restoration of Cultural Assets have completed the restoration of the altarpiece in Santa María y Todos los Santos (Cuenca Cathedral).

The restoration of the altarpiece in Santa María and Todos los Santos Cathedral in Cuenca was finished in 2018. It has been returned to the cathedral and placed in a new location inside its chapel, due to the excellent outcome of the restoration process. The work was been carried out in collaboration with the Madrid School of Conservation and Restoration of Cultural Heritage.

Ramón Castresana (director of Fundación Iberdrola España) together with Venancio Rubio (the company’s institutional delegate in Castilla-La Mancha), Monsignor José María Yanguas (bishop of Cuenca), José Antonio Fernández (dean president of the chapter), Ruth Viñas (director of the Madrid School of Conservation and Restoration of Cultural Heritage) and Luis Priego (professor and coordinator of the altarpiece restoration) met in the cathedral to admire the result of the restoration.

The restoration work on this Gothic piece from the end of the 15th century consisted of dismantling the piece and transferring it to the School’s facilities in Madrid. There, students from the fourth year of the degree course had the opportunity to participate in the restoration process. Exceptional results were obtained in returning all the parts to their original condition.

A total of 10 students from the Sculptural Conservation-Restoration course participated in the restoration process, which began in September 2017 and ended on schedule. The restoration of this piece was the second collaboration between the Fundación Iberdrola España and the School of Conservation and Restoration of Cultural Heritage after the one carried out between 2015 and 2016 on the Virgen del Rosario altarpiece in the church of Navamorales in Salamanca.

The project was made possible thanks to the invaluable support from Cuenca Cathedral and its Chapter House, which from the outset collaborated in every way possible with the School of Restoration and Iberdrola for the conservation of its heritage. 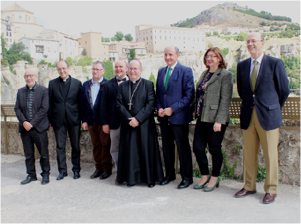 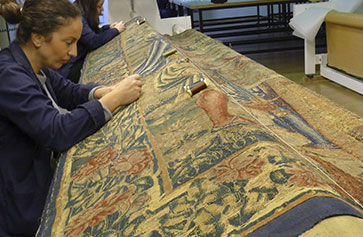 The flamenco tapestries in the Royal College of the Patriarch have undergone cleaning and restoration with the support of Fundación Iberdrola España.

One of the most valuable treasures held by the Royal College of the Patriarch is a series of six large Flemish tapestries, donated by its founder, Juan de Ribera, four of which are displayed hanging on the walls of the Monument Chapel (also known, for this reason, as the Tapestries Chapel). The panels date from the early 16th century, the period when Flemish tapestry production reached its greatest splendour.

Their precarious state of conservation required urgent action to restore them, as they had lost colour and deteriorated through the passing of time.

Work started in early 2013 to restore, clean and consolidate the tapestries, a task that was entrusted to the Royal Tapestry Factory in Madrid.

Cleaning the tapestries is not only a matter of aesthetics, it is an essential task to halt their deterioration and clean up the fabric. In addition, removing materials from prior restorations will make it easier to conserve the tapestries in the future. This work will revive the colours that were concealed under a thick layer of accumulated smoke, while the elimination of the darns and the subsequent repairs to the cloth will consolidate the structural recovery of the tapestries and the visual reintegration of the decorative elements.

The restoration work, completed in 2017, was carried out with the utmost care and rigour and the entire process was documented step by step.

The restoration of the Flemish tapestries in the Royal College of the Patriarch was carried out with our sponsorship at the Royal Tapestry Factory in Madrid.