Fundación Iberdrola España, one of the most transparent

The report Building Trust 2016, a report on transparency and good governance published on the Spanish foundations’ web site by the Fundación Compromiso y Transparencia (Commitment and Transparency Foundation) recognizes the Fundacion Iberdrola España and Fundación Atresmedia as the most transparent corporate foundations. These two tie for top place in the transparency ranking with 17 out of 19 points. 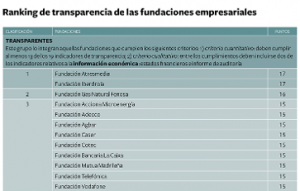 For the eighth edition of the report the sample of company foundations analysed grew from 63 to 75.

For the eighth edition of the report the sample of company foundations analysed grew from 63 to 75. With this increase it was found that the foundations that have been evaluated for a number of years are continuing to make progress on transparency and good governance, while those that had not been examined before had worse results for compliance. This fact illustrates “the importance of having institutions that are truly independent to analyse the sector and offer their guidelines without being biased and being constrained by conflicts of interest of any kind,” said the document.

In the analysis of corporate foundations, 21 were classified as transparent (they meet at least 13 of the indicators and publish two of the economic information indicators: financial statements and audit reports), 24 weretranslucent (they meet at least eight indicators), and 30 were opaque (they meet fewer than eight indicators).
The Fundación Mario Losantos del Campo and Fundación Josep Carreras came top in the transparency ranking for family and celebrity foundations. This year, Fundación Compromiso y Transparencia added two new foundations belonging to famous people (Josep Carreras and Rafa Nadal), although this change in the sample did not lead to a decrease in the levels of transparency as it did with corporate foundations.

In this edition, the report also classified the corporate foundations by the sector to which they belong, revealing that energy and telecommunications were the most transparent. In contrast, distribution and healthcare were the most opaque sectors this year.