HRM King Felipe received some of the students and young researchers who received one of Iberdrola’s almost 150 scholarships for the year 2017-20178 at Zarzuela Palace. 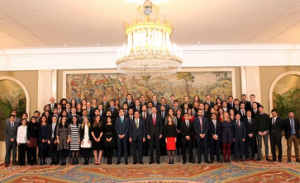 This edition of the International Research Grant and Scholarship Programme has been specially designed for Spanish, British, North American, Mexican and Brazilian students.

Over 70 scholarship recipients of different nationalities attended the audience. During the event, Ignacio Galán, Chairman of Iberdrola, thanked the Crown for “its support to the development of people, training, research and achieving higher employment rates for young people”, main pillars of the Iberdrola Scholarship Programme, to which the company is firmly committed.

“At Iberdrola, we firmly believe that new generations are the engine that drives transformation and makes our world a better place”, added Galán in the presence of HRM King Felipe, highlighting the promotion of education on environmental, energy and sustainability related disciplines, “in which Iberdrola aspires to become a global reference, thanks to its promotion of the use of clean energies and the fight against climate change.”

Moreover, Iberdrola’s Chairman underlined that in this edition of the Programme “approximately 40% of all scholarship recipients are women and this figure grows every year”. In addition, he mentioned that it allows young students to enrol in Master’s degrees and participate in research projects in prestigious institutions, such as Carlos III, Comillas, the Basque Country University, or Cambridge, Strathclyde, Imperial College, Cornell, Rochester or Maine.

Ignacio Galán also stated in the presence of HRM King Felipe all of Manuel Marín’s “good deeds and his approachability”, the President of Fundación Iberdrola who sadly passed away recently; he was the “father and driving force” behind Iberdrola’s International Research Grant and Scholarship Programme, as well as behind the well-known “Erasmus Programme.”

During the official event held at Iberdrola’s Madrid offices, in which the scholarships were given to the scholarship recipients by the Chairman of Iberdrola, Galán stated that “we want to create a new generation of professionals that can transform the current model into a sustainable energy model and successfully address the many challenges our sector and society is currently facing.”

This edition of the International Research Grant and Scholarship Programme, to which the company will allocate 3.7 million euros, has been specially designed for Spanish, British, North American, Mexican and Brazilian students, i.e., the main countries in which the company operates.

Ever since this programme was set up in 2010, the number of scholarships has increased by over 300%, i.e., there has been a four-fold increase in the number of grants given.

To this end, Galán reiterated that Iberdrola has already given grants to over 750 young students of different nationalities and has asked this year’s scholarship recipients to make the most out of this opportunity, in addition to reminding new generations that they play the leading roles in the transformation of the current model into a sustainable energy model. “You are here to think of new ideas and to develop and put into practice the projects that will be used to make our world a better place” he added.

Iberdrola's International Research Grant and Scholarship Programme aims to improve training for the up and coming generations, primarily in the area of energy.

This programme focuses on three areas. The first area is intended to help the students complete their master’s and postgraduate studies in areas related to energy and the environment at top-level centres in Spain, the UK and the US.

The third area is related to the grants awarded by Fundación Iberdrola for training and research in the restoration workshops of the Prado Museum, and in the Bilbao Fine Arts Museum. Therefore, specialists will be capable of completing their studies and education at the highest possible level with the participation in conservation and restoration programmes with the works of art of these prestigious institutions.

In addition, we have the scholarships awarded by Fundación Iberdrola in collaboration with the Fulbright Commission, Fundación Carolina, the Spanish Paralympic Committee and Monterrey Technology Institute, among other institutions.