Manuel Marín, president of the Fundación Iberdrola España, invested honorary doctor by the University of Salamanca 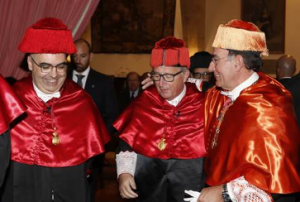 The president of the Social Council of the USAL and president of Iberdrola, Ignacio Galán, greets the doctor and honorary doctor Jean Claude Juncker after the ceremony, accompanied by his godfather of investiture

During the act of investiture, the professor of International Law Luis Norberto González Alonso, exercised the patronage of Manuel Marín, highlighting his ability “to transform the reality that surrounds them, to promote social progress and to effectively improve the lives of their fellow citizens. ” Marín – González recalled – had just completed 33 years of age, “the final and most relevant section of the negotiations that would culminate on June 12, 1985 with the signing of the Treaty of Accession of Spain to the European Communities”. Two years later he managed the conception and implementation of the Erasmus Program, during his first years as a member of a European Commission in which he traveled a journey of 13 years in which he alternated various responsibilities.

“Today, after three decades, the Erasmus Program is unanimously praised as an example of the best Europe, of those complementary actions or of support of the Union that, respecting the essentially national competence in certain areas – such as Education or Culture – and through limited interventions, are able to provide a European added value that makes a difference for the recipients of these public policies, that is, for citizens, “said the sponsor of Manuel Marín, who also did not forget other initiatives” of deep depth ” of the new doctor as the creation in 1992 of the Department of Humanitarian Aid of the European Commission; merits that crown “years of excellent parliamentary practice and an unblemished political trajectory, always inspired by the defense of European values ââand the European ideal, as well as a firm determination to endow this great common project with a soul”.