Fundación Iberdrola México, launches a campaign of support to the people affected by the last earthquake in Mexico. This earthquake had as a tragic consequence the death of more than 200 injured, thousands of injured and dozens of buildings and infrastructure demolished. 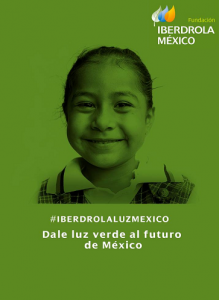 From the Iberdrola Foundation in Mexico, a first donation was made to help the population of the state of Oaxaca.

Ignacio Galán, president of Iberdrola and who was in Mexico D.F. When the seismic movement occurred, he said that in “Iberdrola, we feel the tragedy that Mexico is suffering as its own. We want to express our fraternal solidarity with all Mexicans, with our employees and their families, and offer the authorities our unconditional support and collaboration. ”

In the first days after the earthquake, the humanitarian emergency and assistance to the affected people were priority and from the Iberdrola Foundation in Mexico, a first donation was made to help the population of the state of Oaxaca, the most affected area and region where the The company has four wind farms.

Two months later Iberdrola resumes its commitment to the victims and promotes through its foundation, this new initiative called “Give green light to the future of Mexico” which aims to contribute to the reconstruction.