Queen Letizia has presented the King James I Awards 2017. This year saw the holding of the 29th edition of these awards which highlight the work of researchers and entrepreneurs in Spain. 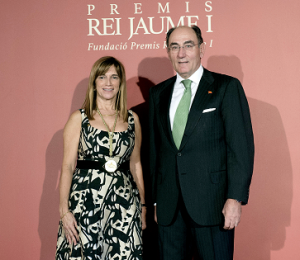 HM the Queen in her speech highlighted the decision of the winners of the King James I Awards to reinvest the prizes into research and more science and entrepreneurship, which ensures that knowledge, education, culture and innovation. She stated “this will continue leading us to a point where each of us, from our own place of responsibility, will continue growing as a country, in a better and fairer Spain”.

This year’s winners were: Fernando Martín in Fundamental Research, Carmen Herrero in Economics, Josep Dalmau in Clinical Medicine, Anna María Traveset in Environmental Protection, Susana Marcos in New Technologies, and Alicia Asín in Entrepreneurship. Each of the winners received a medal from HM The Queen that accredits them as winners of their respective awards.

Iberdrola took part at this event since its Foundation has collaborated for many years with this institution being a member of the Panel and promoter of the prize for Environmental Protection. The awards ceremony was held at La Lonja de la Seda in Valencia, where the awards were presented. It was attended by Ignacio Galán, Chairman of Iberdrola, and Ramón Castresana, Director of the Fundación Iberdrola España.