Today was the presentation of migration and spatial ecology of the spanish population of booted eagles, the second monograph by the migra programme, produced by seo/birdlife with the cooperation of Fundación Iberdrola España. 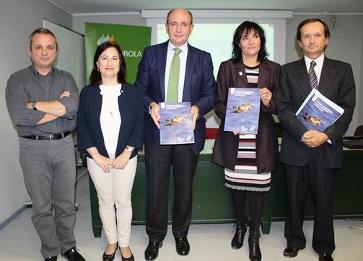 The booted eagle is a migratory bird of prey that breeds in wooded areas all over Spain. The birds spend approximately two months a year migrating (14% of the annual cycle), five months in the breeding areas (42%) and just over five months in the wintering areas. These data emphasise the need for comprehensive habitat management in different countries throughout the year to conserve the species. International cooperation is essential for creating safe areas for booted eagles.

These are the aims of the monograph presented by the SEO/BirdLife Migra programme, which was implemented in cooperation with Fundación Iberdrola España. The study summarises a seven year-long study which began in 2011 and ends now with the publication of Migration and spatial ecology of the Spanish population of booted eagles. Open in new window. This is the first in a series of monographs to be published by the Migra programme, focusing exclusively on the specimens tagged since the programme began. The studies are devoted to understanding the spatial ecology, movements and migration of the birds in Spain.

To explain the importance of these studies, Ramón Castresana Sánchez, director of Fundación Iberdrola España, said “the Migra programme has had the decided support of Fundación Iberdrola España since it began. We are very satisfied with the results achieved and the enormous amount of information collected on over thirty species during this time. This programme promotes cooperation by disseminating knowledge with the aim of conserving migratory birds and their habitats for the benefit of all.”

Asunción Ruiz, director of SEO/BirdLife added that “This is the first monograph that looks at a species studied by the Migra programme since its very beginnings. With this publication, it will be possible to conserve the booted eagle in the future, as we have more knowledge of the areas and habitats that it occupies throughout the year. We will also be able to manage the environment with greater security based on the results presented here. We want this publication to be a reference work on the booted eagle in particular and birds of prey in general and for it to allow us to continue the huge, formidable task of studying and conserving our birds and their habitats”.

Where are booted eagles throughout the year?

During the breeding season, all adult booted eagles can be found in the breeding grounds, located in the wooded areas of the Iberian Peninsula. However, even in the breeding season they make use of wide expanses of habitat around their nests, travelling up to 75 km a day searching for food. They mainly use areas with a mosaic of varied landscapes dominated by stretches of scrubland, agro-forestry areas (mainly rain-fed crops), open areas, fields and pasture land.

Most booted eagles migrate across the Sahara. During migration, they concentrate in the Straits of Gibraltar before crossing the sea to Africa. They then spread out into a broad expanse of the Sahara desert, especially Algeria, Mali and Mauritania. The autumn migration period runs from early August to early October, lasting on average 23 days. The spring migration runs from 25 February to 21 March, lasting about 28 days. These seasonal differences are due to the fact that in autumn the routes are significantly straighter and the rest days less frequent.

The distance travelled each day is longer in autumn (143-253 km/day) than in spring (136-234 km/day), with rare cases of over 400 km/day. In spring the distance travelled daily is farther when the birds are crossing the Sahara desert. Booted eagles fly at speeds of between 40 km/h and 70 km/h when actively migrating.

The eagles reach their wintering areas in Africa mainly in September and October. They remain there for an average of 163 days, until they return to their breeding grounds in February and March. The wintering areas are in the western Sahel, some 2,400-3,400 km from their breeding grounds. However, some areas can be found further south, which, when taken together, form a strip some 900 km wide in which their winter quarters are located, covering eight African countries: Mauritania, Mali, Niger, Burkina Faso, Guinea, Sierra Leone, Nigeria and Chad. They mainly occupy surfaces of grassy vegetation with sparse tree cover (savannah) and, to a lesser extent, mosaics of vegetation and crop lands. There are few locations in wooded surroundings.

Since the 1980s there has been an increase in the number of specimens that remain on the Iberian Peninsula during the winter, generally in the Mediterranean basin, which is a good indicator that these birds are being affected by climate change. Two tagged booted eagles did not migrate to Africa and wintered in the Valencia lagoon, only 300-450 km from their nests. There, they fed on the rice fields and irrigated crops between orange orchards, very different from the species’ normal wintering habitat in the African Sahel. The booted eagles also showed a marked loyalty to their wintering areas, both in Africa and in Spain.

Key points of the study

The study was made possible by tagging 21 specimens throughout Spain using remote monitoring GPS devices. Information on more than 83,000 locations was analysed. Cooperation with the Junta de Extremadura, which joined in these studies, was of great assistance.

The authors of the publication are well-known experts in the study, spatial ecology and conservation of birds of prey at the Universities of Alicante, Valencia and Murcia, Fundación Migres and SEO/BirdLife. In this excellent study, they have collected and exhaustively analysed all the information available on the spatial ecology of the booted eagle. These data will have an impact on their future conservation throughout their area of distribution and serve as a reference work on the species.