Fundación Iberdrola España and the Foundation for the Conservation of the Bearded Vulture (the Spanish abbreviation of which is FCQ) have signed a collaboration agreement to develop and implement a conservation project whose main objective is to assess and understand the relationship between climate change and several, as yet unknown, clinical aspects affecting the populations of bearded vultures and other large Alpine birds. 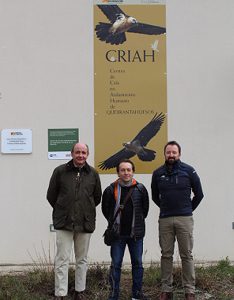 One of the most innovative initiatives is the development and implementation of the Study into the effects of Climate Change on the prevalence and morbidity of diseases transmitted by biological agents among the bearded vulture population of the central Pyrenees.

During a visit to the facilities at the Bearded Vulture Breeding Centre in Zaragoza, the director of Fundación Iberdrola España, Ramón Castresana, the director of the FCQ, Gerardo Báguena, and the head of the Biodiversity Service of the Regional Government of Aragón, Manuel Alcántara were able to review the work being done. This collaboration agreement will have an initial lifespan of two years, with Iberdrola contributing in the region of 135,000 euros.

One of the most innovative initiatives to be undertaken within the framework of this agreement is the development and implementation of the Study into the effects of Climate Change on the prevalence and morbidity of diseases transmitted by biological agents among the bearded vulture population of the central Pyrenees.

This project, which will be supervised by a team of veterinarians and biologists, will evaluate whether the rise in the average temperature, which is linked with climate change, is the cause behind the appearance, in mountainous regions, of insects habitually found in warmer areas and that are propagators of viral diseases against which bearded vultures and other large Alpine birds have no defences. The viruses to be investigated are West Nile virus and that transmitted by Plasmodium, which causes avian malaria.

The study will involve three types of analysis: the first, which will focus on the presence of Plasmodium and West Nile  virus in mosquitos captured near nesting sites in different areas at different heights above sea level.  Next, a serological and molecular study will be undertaken into the degree of contact with and the prevalence of West Nile virus and the presence of Plasmodium in the blood of chicks and juveniles within Aragon’s population of bearded vultures. Finally, the nest boxes of Alpine passerines will be used to detect the presence of these viruses in the birds.

These investigations, the results of which will enable valuable information to be gathered regarding the short- and medium-term future of this species, will be carried out several times throughout the year in up to ten areas of the Aragonese Pyrenees in which the bearded vulture is to be found.

The  Foundation for the Conservation of the Bearded Vulture is an organisation founded in 1995 and it has been declared to have aims that are in the general interest by the Spanish Ministry of Interior. It is dedicated to the promotion, development and implementation of nationwide conservation, investigation and rural development projects in the mountainous habitats in which the bearded vulture lives.

For its part, the Fundación Iberdrola España is committed to environmental protection. This collaboration is yet another example of Iberdrola’s commitment to biodiversity being extended to significant actions governed by the guidelines set out in its Executive Plan regarding support for conservation programmes involving threatened species and the restoration of protected habitats.