Ávila City Council and Fundación Iberdrola, today signed an agreement to make the lighting of the Cathedral of Ávila a reality. 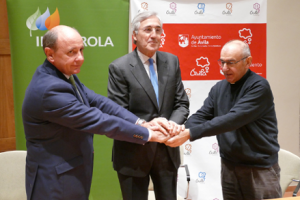 The aim is to improve the night-time appearance of the temple.

This morning in the town hall, the mayor of the capital of Ávila, José Luis Rivas, and the director of the Iberdrola Foundation, Ramón Castresana, in the presence of the dean of the Council of the Cathedral of Ávila, Fernando Gutiérrez, signed the agreement that will improve the night-time appearance of the temple, highlighting the distinctive elements of its architecture, while also limiting light pollution.

To renovate the ornamental exterior lighting of the walls of the Cathedral of Ávila, the Iberdrola Foundation will apply the most advanced LED technology in a 220,000-euro project.

The goal of the project, which is part of the Fundación Iberdrola España Illuminations Programme and the Master Plan for Lighting Ávila’s Nocturnal Landscape, and one of the events of the Teresian Jubilee Year, is to achieve excellent general lighting that singles the building out from a distance and enables it to be observed and admired.

The Cathedral of Christ the Saviour, a Cultural Interest Heritage Site, was the first Gothic cathedral in Spain and designed as a temple and fortress; its apse is one of the cubes of the city wall.

The lighting of the Cathedral of Ávila is another example of Iberdrola’s commitment to Castilla y León and its enduring mission to promote the social value of the region’s culture and protect and conserve its historical-artistic heritage.