Restored the altarpiece of the Cathedral of Cuenca

The director of the Iberdrola Foundation, Ramón Castresana, accompanied by the institutional delegate of the company in Castilla-La Mancha, Venancio Rubio, and the chaplain and director of the cathedral of Cuenca, Miguel Ángel Albares, visited the Conquense temple chapel, where the Iberdrola Foundation and the School of Conservation and Restoration of Cultural Assets of Madrid (ESCRBC), undertake the restoration of the altarpiece of Santa María and Todos los Santos of the cathedral of Cuenca, in the framework of an agreement signed in 2017. 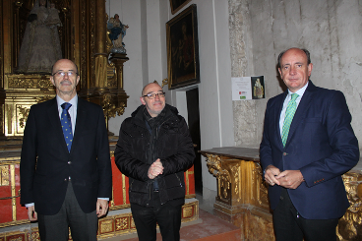 The project’s objective is the the return complete of the pieces to its initial state, respecting at all times its aesthetics and original elements of the altarpiece.

The works of restoration of this Gothic piece of end of century XV include its disassembly and transfer to the facilities of the school in Madrid, where the students of last course have the opportunity to participate in the process of restoration, which has as objective the return complete of the pieces to its initial state, respecting at all times its aesthetics and original elements of the altarpiece.

This process, in which these students participate during the school year, has begun in September 2017 and is expected to end at the end of 2018. It is the second collaboration between the Fundación Iberdrola España and the Escuela Superior de Conservación y Restauración de Cultural Assets of Madrid, after the one made in the altarpiece of the Virgen del Rosario of the church of Navamorales in Salamanca, carried out between 2015 and 2016.

The implementation of the project has been possible thanks to the support of the cathedral of Cuenca and its council.

The implementation of the project has been possible thanks to the invaluable support of the cathedral of Cuenca and its council, which from the first moment have offered to collaborate in everything necessary with the ESCRBC and Iberdrola for the conservation of their heritage.

This collaboration of the Iberdrola Spain Foundation is another example of its commitment to the promotion, recovery and conservation of historical-artistic heritage, as well as supporting the training of a new generation of professionals capable of promoting the transformation towards a sustainable energy model.