The exhibition, which will be on display at both museums from 13 February until 27 May 2018, features over seventy paintings from museums and private collections from Spain and abroad, some having never been on public display until now, along with a magnificent array of dresses and accessories from that era, including valuable items lent to the exhibition by major institutions and collectors, many of which will also be on show for the first time. Each museum offers a selection of items and works, so the ideal way to get a full and completely enriching view of the exhibition is to visit both. 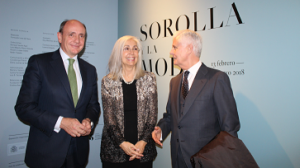 Each museum offers a selection of items and works, so the ideal way to get a full and completely enriching view of the exhibition is to visit both.

Sorolla was a lover of fashion and the perfect chronicler of the changes in trends between the late 19th century and the early 20th century. His paintings show an evocative catalogue of dresses, jewellery and accessories enhanced by the mastery of his light yet vigorous brush strokes. Further proof of the painter’s interest in fashion can be found in the documents he kept, including photographs, sketches and letters with many a reference to dress codes. Sorolla, born into a humble family of fabric sellers, was married to Clotilde García del Castillo, a woman from an aristocratic and wealthy background owing to the family’s social status gained by the fame acquired by her father, the photographer Antonio García de Peris. The couple’s social references are crucial in understanding Sorolla’s evolution and why a person’s image was so important for the Sorolla family, drawing a clear parallel between his social and financial rise and his keen interest in fashion and clothing.

His work as a portrayer of society was not the only thing that led him to focus on people’s dress; it partly stemmed from his eye for observation and genuine interest in all that surrounded him. In this regard, the painter fitted the image of modernity established by Baudelaire in The Painter of Modern Life, where an artist was described as an “observer, flâneur, philosopherâ¦” and a man of the world. The exhibition focuses especially on the female portraits painted by the artist between 1890 and 1920, which are displayed in the halls along with dresses and accessories from the late 19th and early 20th century.

Find out more about the exhibition in Sorolla y la moda.