The new ornamental lighting of the Royal Pantheon of the Collegiate Church of San Isidoro de León, is a reality thanks to an extensive renovation process according to the needs and relevance of this chapel built in the eleventh century, carried out by the Iberdrola Foundation. 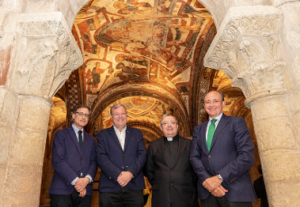 The aim is to develop and execute an ornamental lighting project in this chapel to highlight the excellence of its cultural assets.

The abbot-president of the Cabildo de San Isidoro, Francisco Rodríguez Llamazares; the mayor of León, Antonio Silván; the general director of Heritage of the Junta de Castilla y León, Enrique Saiz; the vice president of the Deputation of León, Francisco Castañón; the sub-delegation of the Government in León, María Teresa Mata, and the director of the Iberdrola Spain Foundation, Ramón Castresana, participated in the act of lighting the new lighting of the Royal Pantheon.

The renovation project, which involved an investment of 87,000 euros, was undertaken thanks to the collaboration agreement signed between Iberdrola, through its Foundation in Spain, and the Cabildo de la Colegiata de San Isidoro de León in June 2017, whose aim was to develop and execute an ornamental lighting project in this chapel to highlight the excellence of its cultural assets.

Fundación Iberdrola has carried out an extensive renovation process according to the needs and relevance of this chapel built in the eleventh century, carried out by the Iberdrola Foundation.

The project has used LED projectors with a chromatic reproduction of more than 98%, which makes it possible to obtain a totally reliable color perception and a color temperature of 3000ºK, very similar to sunlight. The benefits of LED technology have been used to the maximum since it is the most respectful with the paintings, as it does not emit infrared or ultraviolet light.

The ornamental lighting design of the vaults has been based on crossed light beams to ensure a perfect uniformity, as well as avoiding a high concentration of light at the start of the light beams, reducing a high light exposure of the paints. In addition, three natural light sensors have been incorporated that will automatically adjust the light level of the interior of the Royal Pantheon. To this end, a centralized control system has been installed to regulate the light intensity.