On the occasion of the World Migratory Bird Day, which is celebrated next May 12, today SEO / BirdLife has marked 4 peregrine falcon chickens with the collaboration of the Iberdrola Spain Foundation, which sponsors the Migra program for the study of the migration of birds since 2011. According to the census of the species that is doing SEO / BirdLife during 2018 in the community of Madrid there are 38 couples, of which 23 would be located in the mountains, 3 in the countryside and 12 in the center of Madrid. SEO / BirdLife has been monitoring the population of peregrine falcons in Madrid for many years. In 2007 a couple was identified in the General Hospital Gómez Ulla, a nest box was placed to help in its reproduction and this breeding point was occupied by a couple; since then the peregrine falcon breeds in it. 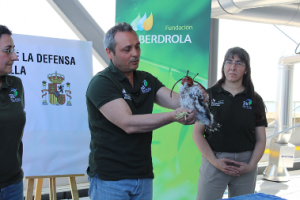 SEO / BirdLife has marked 4 peregrine falcon chickens with the collaboration of the Iberdrola Spain Foundation.

The peregrine falcon is distributed more or less homogeneously throughout the Community of Madrid, both by the Guadarrama mountains and by the river cuttings of the rivers Henares, Jarama and Tajo, although in a specific way it nests within the urban area of Madrid (currently 8 couples). Its population, before the decline began, was distributed more or less to 50% between the mountains and the countryside.During 2017 the couple installed in the Hospital Gómez Ulla could not raise due to the occupation of the box by a hawk individual used for falconry and who had escaped from its owner. After almost a year of capture attempts by the SEO / BirdLife technicians, in collaboration with the Community of Madrid, the specimen could be captured last February with the collaboration of the group GÃ © philos de anillamiento.This individual was transferred to the Wildlife Recovery Center of the Community of Madrid. A week after the withdrawal of this copy of falconry, the presence of the pair of wild peregrine falcons in the area was confirmed.

Situation of the species in Spain

The current population in Spain is around 2,800 couples. Its highest densities are found in the provinces around the peninsula and Balearic perimeter. It is associated with cut, where nesting, hence all the coastal cliffs and the mountains of the Mediterranean and northern peninsular north have good populations. In urban centers it is scarce and in certain cities they have been able to install thanks to reintroduction programs made by man, however the population of the Community of Madrid, has settled more naturally, only in certain points it has been helped with the placement of boxes where you can nest, but have settled in those territories at your initiative.

How do hawks migrate?

Worldwide, the peregrine falcon is considered a partial migratory species: the populations of northern Europe are migratory, while those of the Mediterranean area are sedentary. Thus, the Spanish peregrine falcon population is sedentary, although the young specimens make short movements. Our territory also hosts migrants from northern Europe who essentially flock to winter, according to the scarce step that is recorded annually by the Strait of Gibraltar. To know more precisely the movements that these magnificent birds make throughout the year, today, on the eve of the World Migratory Bird Day celebrated on the second Saturday of May around the world, SEO / BirdLife has ringed four chickens from peregrine falcon in order to know their movements inside and outside Spain.

“Uniting our Voices for Bird Conservation” is the motto of the World Day of Migratory Birds 2018. This year the campaign will have a new global dimension, by uniting the main migratory corridors of the world, also called air corridors, to organize celebrations Worldwide. As birds migrate during different seasons of the year, the World Migratory Bird Day will take place on the second Saturday of May (day 12) and October (day 13), thus enabling organizations and individuals to carry out educational activities and events. awareness in their countries at the time of migration.