One of the most famous works by Guido Reni, which entered the Prado Museum as part of its founding collection, Hippomenes and Atalanta, can be seen today in a special installation located in the Central Gallery. Thanks to its recent restoration and the provision of a new frame, it will be possible to appreciate the composition as the Italian master conceived it.

The restoration work, carried out with the support offered each year by Fundación Iberdrola España, Protector of the Museo Nacional del Prado’s Restoration Program, has shown that it is truly a work of great luminosity and expressive strength, far from the “caravaggiesque” appearance that it had acquired with the aging of the materials over the years. During this intervention, which lasted nine months, it has been noticed the existence of two bands added in the left and lower areas that were not original to the master, also restoring its original vision.

The work can be admired in this special installation until the first week of November this year, when it will leave the Museum to participate in the exhibition on Guido Reni that, in collaboration with the Prado, the Städel Museum in Frankfurt is preparing. In 2023, it will return to be present at the Prado’s major exhibition on Guido Reni (March-July 2023) where it will share space with the analog version kept at the Museo di Capodimonte.

The main objectives of the restoration, carried out by Almudena Sánchez, were, on the one hand, the removal of the oxidized varnishes that transmitted a yellowish tone to the painting, especially warm on the flesh tones of Atalanta and Hippomenes and, on the other hand, the regeneration of the altered and opaque areas. Former interventions were the cause of the numerous and extensive repainting that over time were degraded to become very disturbing stains that have survived until today and that were another very negative factor for the aesthetic appearance of the work. In addition, the painting was reframed and the size of the work was enlarged with two bands of the canvas, one of 7 cm on its left edge and another of 13 cm added to its lower edge, thus altering the original size of the composition.

Fortunately, the transparency of the varnish has been recovered, through which the color of the painting that had remained hidden can be appreciated. A good example of this is the recovery of the hair of Hippomenes, in which the opacity of the varnish had annulled the brown tone and the volume of the curls located at the back of the head. But the most decisive area for the recovery of the space and the different planes of the composition was undoubtedly the strip corresponding to the sea, which responded positively to the treatment in such a way that the whitish and opaque layer gradually became transparent, bringing to the surface the dark blue of the sea.

During the last phase of the restoration, the chromatic reintegration of all the damages and lack of color that had been exposed after the elimination of the old repainting that hid them was carried out. Particularly noteworthy is the reintegration of the loss that followed the line of the seam from one end of the painting to the other, passing through the bodies of the two characters, fundamentally the recovery of the beautiful profile of Atalanta, in which we can now appreciate the delicacy of her features and the subtle rosiness of her cheeks.

Once the restoration is completed, we can appreciate an image of the work much closer to that conceived by Guido Reni, for the recovery of light, color, and space in which the scene takes place and, above all, because the two striking figures of Hippomenes and Atalanta, recover the strength of the anatomies and the sharpness of the flesh tones elaborated with subtle shadows with which Guido Reni is modeling the bodies in movement, those beautiful bodies that have always captivated the viewer and now do so with greater intensity. 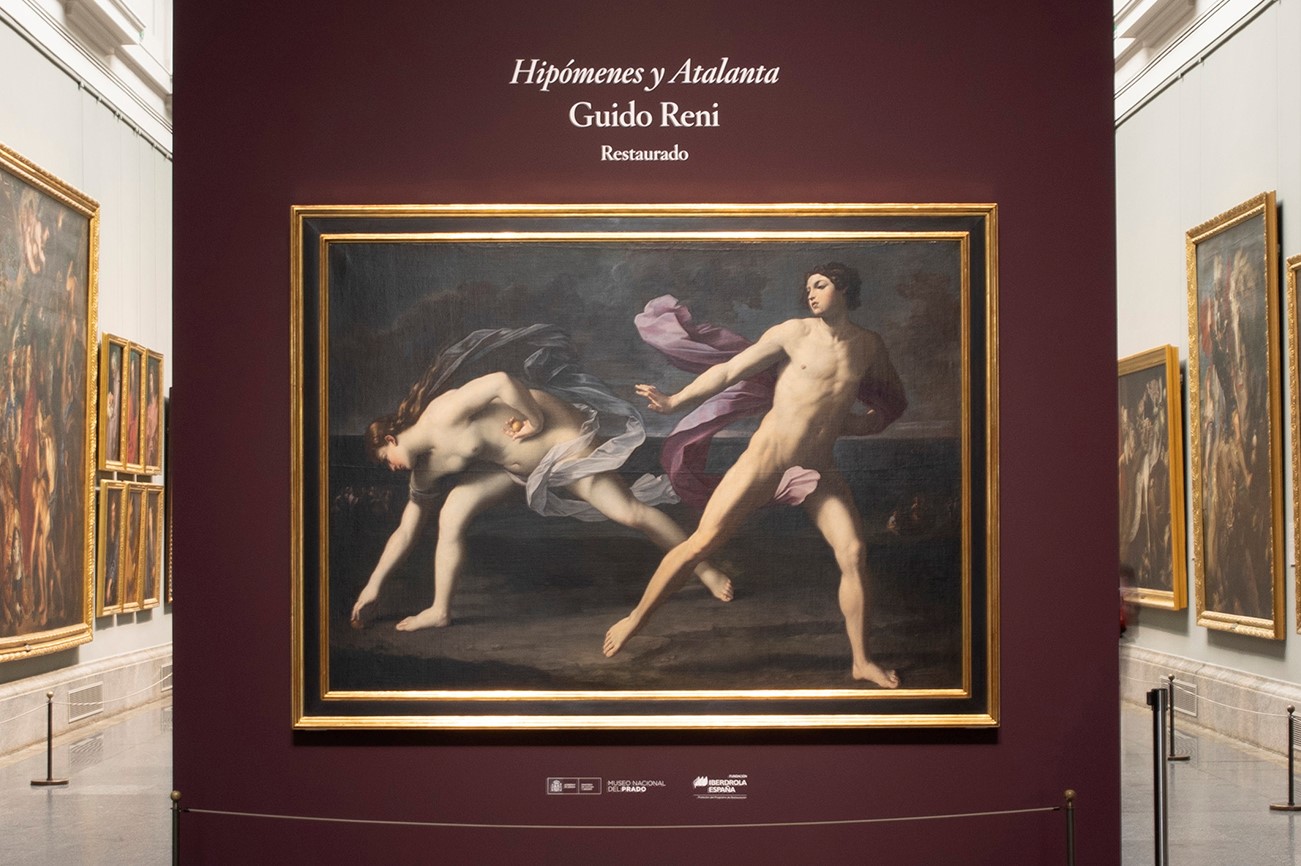 This is one of the most famous and controversial works of this artist and, in general terms, of the Bolognese Baroque. This painting was part of the collection of the Marquis Giovan Francesco Serra, a collection that was acquired in 1664 by Gaspar Bracamonte y Guzmán, Count of Peñaranda and Viceroy of Naples from 1658 to 1664, destined for Philip IV. It entered the Museo Nacional del Prado with the foundational funds and was exhibited in the Sala Reservada from 1827 to 1838 along with 73 other nude works.

The story tells how Atalanta, daughter of a king of Arcadia, had offered herself in marriage to whoever was able to beat her in the race, a sport for which she had achieved an outstanding ability. The punishment established for all those who were defeated was death. Despite the risk, Hippomenes accepted the challenge with the help of Venus, who provided him with three golden apples that the young man threw as he went along, thus managing to delay Atalanta who stopped to pick them up. However, once married, Hippomenes forgot to thank the help of the goddess who had brought about his victory, which ended up metamorphosing the two into lions. Reni resolves the composition by placing both figures in the foreground, thus creating a diagonal structure that reflects a specific moment in the narrative, when Hippomenes throws an apple that Atalanta picks up, a circumstance that in the end will be the cause of his defeat.

Many of the essential characteristics of Reni’s art are present in this fundamental piece of his catalog. His classicism is manifested, not as archaeological clothing but rather as a motif of formal reflection, in the vigorous anatomies, or in the frieze distribution of the characters that interpret the drama. And also, on different terrain, in its ideal of beauty, which is manifested in the formal perfection of the naked bodies, in their almost symmetrical balance, and in their dramatic qualities, which are expressed through restrained attitudes, even though they are in the middle of a race that will decide the fate of both young men. In all of this, color plays a fundamental role.

Fundación Iberdrola España develops one of its main lines of activity around the care and maintenance of the cultural and artistic riches of our country.

Fundación Iberdrola España acquired the status of “Protector” of the Museo Nacional del Prado in 2010, through its support for the conservation and restoration programs of the art gallery, as well as the development of 4 annual scholarships for young restorers. Thanks to this collaboration, it has been possible to carry out interventions that have given back to great works of the Prado collection the luminosity and depth with which they were conceived, such as Dürer’s Adam and Eve, The Wine of the Feast of St. Martin and The Triumph of Death by Pieter Bruegel “the Elder”, La Gioconda from Leonardo’s workshop, The Adoration of the Magi and The Temptations of St. Anthony by Bosch, The Annunciation by Fra Angelico, The Countess of Chinchón by Goya and most of the pieces from the Treasure of the Dauphin.

It also wished to join the Extraordinary Program for the Commemoration of the Bicentenary of the Prado Museum and, specifically, the deployment of this traveling exhibition in Spain.

Since 2011, Fundación Iberdrola España has allocated a total of 13 million euros to the area of Art and Culture, which focuses its resources mainly on the Restorations Program, which supports the restoration workshops of leading museums for the conservation of their pictorial and artistic heritage; and the Illuminations Program, which includes the design, execution, and financing of artistic lighting projects in unique buildings and monuments.